You may have heard the saying “everything is bigger in the USA” and truth be told this totally applies to skateparks in the United States too. The biggest skateparks in the USA can be found in variety of states from California, Texas, Nevada, Oregon, and even Massachusetts.

Skateparks in the United States didn’t start getting built until many years after skateboarding was actually invented. The first skateboards were manufactured commercially in the 1950s but skateboarding didn’t really take off until the late sixties and early seventies. In the seventies is when skateparks became super popular however they were a little different to what we see today. At that point in time, skateparks were considered retail businesses and were built to capitalize on the sport’s growth. Most skateboarders were willing to pay to skate these facilities due to them having ramps and other obstacles that were not available to them anywhere else.

The late seventies saw most of these commercial skateparks close their doors due to insurance premiums rising as underwriters were tightening restrictions on what they were willing to cover due to an excessive amount of lawsuits. In a way this could be seen as a blessing in disguise as some skateboarders went back to the street and a new era of skateboarding was born. But skateboarders still wanted to skate ramps so another part of skateboarding was created, ‘Do it yourself’ or ‘DIY’. Skaters were building ramps and other transitional features in backyards and derelict parts of town. Some of these public DIY spots in time actually became legit and legal skateparks.

Eventually city officials across the country were getting tired of skaters grinding handrails, park benches, jumping down stairs, and building ramps in public areas so the public skatepark era was born.

Skateparks in the beginning struggled in the design concept and the correct materials needed to build quality ramps was lacking. This was the trial and error days and a lot of it is the result of people who didn’t skate trying to build skateparks. I’m not even going to talk about pre-fabricated ramps. Okay moving on.

It wasn’t until actual skateboarders started becoming involved with the design and build process that skateparks really became skateable. Over the years several top skatepark builders emerged and now the industry is in great hands. Skateboarding is becoming more widely accepted now days and the people in power and local governments are starting to see the benefits a skatepark can bring to a community.

The future is looking bright and we are lucky to live in a time where skateparks are thriving. So without further ado here is a list of the biggest skateparks in the USA. They are listed in order from largest to smallest.

Biggest Skateparks In The USA

Lauridsen Skatepark in Des Moines officially opened on May 7th, 2021, and is now the biggest skatepark in the USA. The enormous 88,000 square foot skatepark is what skateboarders all around the world dream of skating or even better, having in their own town or city. This skatepark was designed by legendary skateboarder Lance Mountain and Colby Carter of California Skateparks, so you know it is world-class!

At a quarter mile long and a total area of five acres, you can expect just about every skateboarding obstacle known to man here.

This street course features ten types of ledges including straight, out, banked, hubba,
and down ledges. As for rails there are eleven types including flat, down, out, round, and square. If you like stairs they have them too, as well as an array of banks, gaps, hips, and transfer lines.

In typical Texas fashion, the skateparks in the Lone Star State are huge. North Houston Skatepark is the real ‘big dog’ when it comes to Texas skateparks weighing in at a whopping 78,000 square feet! This is the biggest skatepark in Texas!

This skatepark consists of a twenty foot full pipe, twelve foot vert bowl, ten foot bowl, and a killer snake run. The street section is just as impressive with every kind of obstacle known to man such as ledges, hubbas, manual pads, handrails, flat bars, stair sets, A-frames, banks, and the list goes on.

Lake Cunningham Skatepark is California’s biggest skatepark coming in at 67,000 square feet and was built and designed by California Skateparks. This skatepark is known for having the world’s largest cradle and tallest vert wall both measuring twenty two feet, and the largest full pipe with a banked entry and a spiraled end that emulates a breaking wave measuring twenty feet.

There are six bowls that range from beginner to expert level and also includes two thimbles and a flow section. The street course consists of a stair set, hubba ledges, pump bumps, banks, rails, and more.

Park amenities include internal landscaping, lights, a drinking fountain and restrooms. Lake Cunningham Skatepark requires a day pass to use the facility which costs $10.

Craig Ranch Skatepark is a massive 65,000 square feet and was built by Hardcore Skateparks. And yes, you better believe this park is hardcore! We are talking bowls in big, medium and small sizes, a cradle, snake run, walls, extensions, and the list goes on. The street course is loaded with ledges, hubba ledges, out ledges, A-frames, hand rails, flat bars stair sets, manual pads, and bank ramps.

There is something for everyone here and it’s the biggest skatepark in Nevada!

Northeast Community (also known as ‘Frisco’ skatepark) is a whopping 47,000 square feet making it the second largest skatepark in Texas! This skatepark has a lot of everything from transition to street and everything in between. The street plaza has granite ledges, regular ledges, manual pads, stairs, wedge to wedge, banks, volcano, a bank to barrier, and more.

There is a massive multi-depth flow bowl with a six foot extension, an over vert pocket, tombstone extension, and various pump bumps. A contest sized bowl with pool coping has also been thrown into the mix.

The Volcom Brothers Skatepark, also known as Mammoth Lakes Skatepark, is a 47,000 square foot combination of earthy transition and street obstacles. There is a large cradle, burnside wall, various humps, bumps, walls, pool style bowls, and flowing transition. Large boulders have been incorporated into the design and can also be skated.

The street course is really cool and part of it is nestled among the pine tree and there are a variety of ledges, rails, mini quarter pipe, pole jam, stairs, jersey barrier, curb, and other obstacles.

The skatepark sits at around 8,000 feet elevation and is blessed with stunning views of the eastern Sierra Mountains.

Lincoln City Skatepark was built in phases by Dreamland Skateparks and now measures around 40,000 square feet. There are four separate bowls which include the cradle and half pipe, moguls bowl, swimming pool, and the snake run. The skatepark is very popular among transition skaters and a must visit for all bowl fanatics.

Tinnell Memorial Skatepark is 40,000 square feet making it the biggest skatepark in Arizona! This epic masterpiece was built by California Skateparks. The park features a Street League inspired skate plaza with just about everything you could ever dream of such as ledges, down ledges, rails, flat bars, stairs, A-frame with a gap, flat gaps, and banks.

There is also a backyard bowl, flow course and a wall ride around a palm tree! This is a sweet skatepark and is right on Lake Havasu so you can cool off after shredding with your crew!

Lynch Family Skatepark is 40,000 square feet and was built by California Skateparks in 2015. The skatepark’s design captures the creativity and aspirations from over four hundred local skateboarders and professionals. It features replica obstacles from unique skate spots throughout greater Boston area.

There are several bowls of different sizes and designs along with quarter pipes, walls, banks, flat ledges, out ledges, hubba ledges, handrails, flat bars, stair sets, slappy curbs, and more. The skatepark is lit up until 9pm every night.

Santa Clarita Skatepark could possibly be the biggest and most bad ass skatepark in the Los Angeles area. Built in 1998, this 40,000 square foot skatepark caters to all types of skateboarding and skateboarders.

The skatepark features a variety of bowls such as a nine foot and six foot clover, a ten foot square bowl, and a U shaped half pipe. There is also a snake run and a half pipe tunnel. As for the street section, it has an array of handrails, flat bars, ledges, down ledges, stairs, skateable planters, banks, and manual pads.

Instagram is for many skateboarders the primary source where they view the most skateboarding related content. Let’s face it, we have our phones glued to…

Likely if you are reading this article then you’re looking for a skate shop in Sydney. Maybe it’s time for you to upgrade that chipped…

The two most important things to a skateboarder are having fun and being able to purchase the best skateboarding equipment they can. Pittsburgh locals understand… 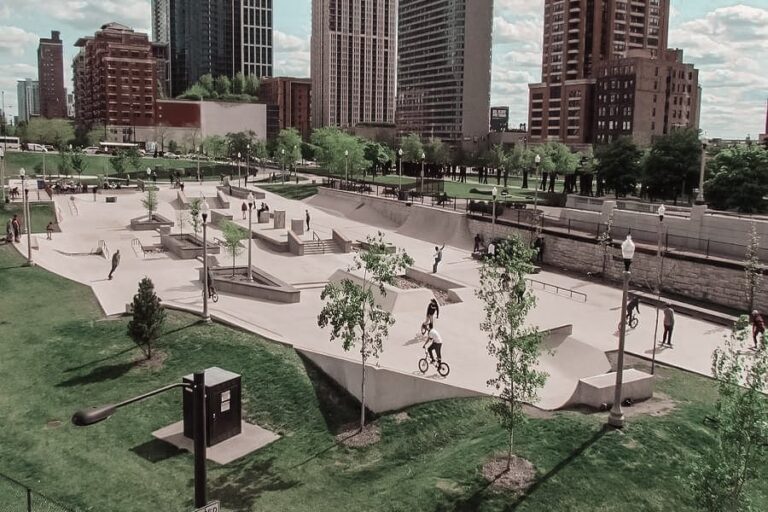 Illinois has some of the best skateparks around. Especially if you like to skate street-style skateparks. The popularity of street skating has influenced the way skateparks are being built these days and Illinois has taken…

Atlanta is known as one of the best cities for street skating but the entire state of Georgia also has some of the best skateparks you have ever laid your eyes on. If you want… 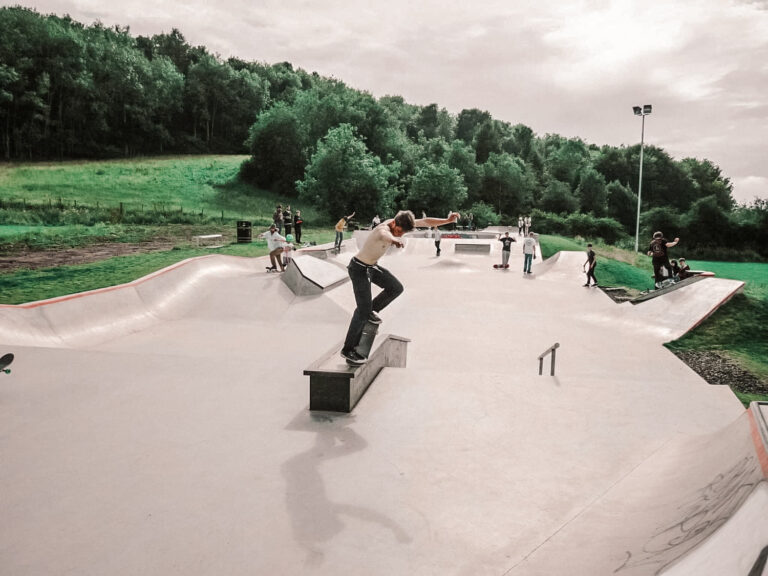 Scotland offers its skateboarders a decent amount of skateparks that consist of big bowls and fun street courses to suit all levels of skaters. While the skate scene isn’t huge in Scotland, there is an…